Styrax sumatrana belongs to the genus Styrax in Styracaceae and is known for the synthesis of resinous material [1]. Styrax sumatrana, also known as kemenyan, is endemic in Indonesia and widely distributed in North Sumatera. In 2017, Styrax sumatrana covered up to 23,068 ha with a total production of 8,332 tones [2]. The main product of kemenyan is benzoid resin, a non-timber forest product locally known as kemenyan resin with a high economical value [3], and is widely used in various ritual ceremonies, as well as being used for cosmetic and medicinal purposes [4, 5].

The market price of the resin varies for different grades which depends on several important factors, particularly size, odor, color, and fragility. Iswanto, et al. [6]. Aswandi and Kholibrina [7] have determined that the physico-chemical properties of the kemenyan resin vary for different grades. The local Grade I of kemenyan resin obtained from a community forest in North Sumatera, Indonesia has the highest purity and balsamic acid content as well as lower ash content, melting point, and moisture content [7]. It also has been reported that the kemenyan resin from North Sumatera mainly comprises of cinnamic acid and ethyl cinnamate, which indicates a high quality of the resin as compared to the resin obtained from other places [5]. The kemenyan resin is commonly harvested from the trees by a tapping process. After the tapping process, the resin is separated from the bark. Very often, the bark is used as incense that has a relatively low price, USD 2/kg – 5/kg  [8]. The economic value of the kemenyan bark can be increased by further extracting saponin that has a higher price of approximately USD 5/g from the bark [9]. However, the extraction process of saponin from the kemenyan bark is hindered by the high lignin content of the bark. An alternative way to overcome this limitation is through pre-treatment of the bark with white-rot fungi to reduce the lignin content of the bark [10].  However, previous studies on the delignification of kemenyan bark for the extraction of saponin are very scarce.

Moisture content of the kemenyan resin was determined by using a Moisture Analyzer HB43-S (Mettler Toledo, USA). The moisture content of the kemenyan fruit was measured by using a drying method. Each part of the fruit, particularly exocarp, mesocarp, endocarp and endosperm were dried for 24 h in an oven at 103°C until constant weight [11]. The fruit parts were then crushed using a blender and filtered using a 60-mesh sieve for further analysis.

Impurity content in the kemenyan resin was determined by dissolving the resin (2 g) in ethanol (25 mL) using an Erlenmeyer flask as suggested by Waluyo, et al. [12]. The solution was filtered using a filter paper. The residue was then washed by ethanol and dried in an oven at 103°C until constant weight. The impurity content in the resin was calculated using Equation 1.

Cinnamic acid content in the kemenyan resin was determined through a gradual extraction method as suggested by Waluyo, et al. [12]. Kemenyan resin (1.5 g) was mixed with 25 mL of 0.5 N potassium hydroxide–ethanol solutions and incubated for 1 h in an Erlenmeyer flask. After that, the ethanol inside the mixture was evaporated. The mixture was added with 50 mL of hot distilled and homogenized water.  After the mixture was cooled, another 80 mL of distilled water was added to the mixture along with 50 mL of 3% magnesium sulfate solution. The mixture was then homogenized and incubated for 10 min, then filtered using a filter paper, and the obtained residue was washed with 20 mL of distilled water. The filtrate and water from the washing process were acidized with 15 mL of 4 N HCl and then extracted 4 times with 20 mL of dichloromethane. The dichloromethane phase was collected and then extracted again with 70 mL of 5% NaHCO3 solution. The formed water phase was collected and then washed with dichloromethane.

Afterwards, the water phase was acidized with 15 mL of 4 N HCl and then extracted with 70 mL of chloroform. The chloroform phase was collected and then vaporized until the residue was obtained. It was then mixed with hot water, filtered, and cooled. The attained crystal was filtered, washed with cool water, and dried in an oven at 105°C for 2 h. The dried crystal was specified as cinnamic acid crystal. The cinnamic acid content in the kemenyan resin was calculated using Equation 2.

Where DWcrystal is the weight of dried cinnamic acid crystal (g) and Wresin is the initial weight of resin.

Additionally, 0.1 g of cinnamic acid crystal was dissolved in 20 mL of ethanol in an Erlenmeyer flask. The mixture was heated in an oven at 50°C for 1 h and then tittered with 0.5 N NaOH, with phenolphthalein as an indicator, until the color of the mixture changed from yellow to reddish orange [12]. This procedure was conducted to measure the purity of cinnamic acid, and the purity can be calculated using Equation 3.

Cinnamic acid crystal was dissolved in chloroform. A small amount of the solution was placed on a thin layer chromatography (TLC) plate by using a capillary pipette as suggested by Waluyo, et al. [12]. Silica was used as a stationary phase of the TLC plate. Mixtures of ethyl acetate and n-hexane, with ratios of 1:9, 1:1, 7:3, 8:2 and 1:0, were used as the eluent and added to a container. The plate was then observed under the ultraviolet (UV) lamp to detect the spot that was formed due to the elution. The retention factor value can be calculated according to Equation 4.

Similar steps were applied for the TLC analysis of saponin, however, the sample was first dissolved in ethanol. The applied eluent was the mixture of chloroform: methanol: water with a ratio of 70:44:10. After the elution process, the TLC plate was sprayed with Liebermann-Burchard reagent.

2.7. Qualitative and Quantitative Analysis of Saponin

Qualitative analysis was carried out to determine the presence of saponin from the kemenyan bark samples. The kemenyan barks were crushed with a blender. The crushed sample (2 g) was boiled with distilled water (10 mL).  The mixture was then filtered, gently shaken, followed by an additional 3 drops of HCl, and shaken again. Afterwards, the resulting foam was observed [13].  For quantitative analysis of saponin, 50 mL of 20% ethanol was added to the crushed kemenyan bark samples (10 g) and then heated. The mixture was mixed continuously using a magnetic stirrer at 55°C for 4 h. The mixture was filtered, and the resulting residue was added with 100 mL of 20% ethanol. The extract from the first and second extraction were collected and vaporized until the volume of the solution was 40 mL. The concentrate was then extracted with 50 mL of chloroform 3 times. After that, the chloroform was separated, and the extract solution was added with 30 mL of propanol. The solution was then dried, and the residue was weighed to determine the amount of extracted saponin.

2.8. Isolation of Lipid from Kemenyan Fruits

Isolation of lipid from the kemenyan fruits was carried out using a Soxhlet method as suggested by Prada, et al. [14]. Dried kemenyan fruits (3 g) were extracted with 300 mL of n-hexane for 6 h at a temperature of 60–70°C. The lipid extract was separated from the solvent by using a rotary evaporator at 40 rpm, 60°C and 360 mbar.

Important characteristics of kemenyan resin (grade IV, V and VI) from Humbang Hasundutan, North Sumatera, Indonesia have been determined and the results are shown in Table 1. The size of grade IV resin lies in the range of 1-2 cm whereas the size of grade V resin was less than 1 cm and fine particles were observed for grade VI resin. The color of the resin varies from light to reddish yellow for grade IV resin and light reddish brown for grade V and VI resin.  The size and color of the resin observed in this study resembles the current grading system practiced by the farmers in Indonesia as reported by Aswandi and Kholibrina [7]. The price of grade IV to grade VI resin is lower than the price of grade I to III due to smaller resin size and also due to the change in color of resin from pure white to become more brownish. Grade IV to grade VI resins have a smaller resin size because the grade IV resin was typically obtained after third harvest from kemenyan bark whereas grade V resin was collected during bark cleansing and the remaining resin was categorized as grade VI [7].

Table 1 shows that the percentage of impurity increased from 1.69% for grade IV to 5.38% for grade VI resin. The impurities may comprise of barks, ash and other components that stick to the resin during the harvesting or post-harvesting process. The impurities can be removed from the kemenyan resin by dissolving the resin in ethanol since some impurities like polysaccharides and lignin do not dissolve in ethanol [17]. From Table 1, it can also be observed that the cinnamic acid content sightly varies from 21.78% for grade VI resin to 24.89% for grade IV. These values lie in range of 23.87 to 27.29% reported by Aswandi and Kholibrina [7] for grade IV to grade VI resin, where the cinnamic acid content increases with the increases of resin quality. A TLC analysis was conducted to see whether cinnamic acid in the kemenyan resin was fully isolated or still mixed with other balsamic acid compounds. Cinnamic acid is considered pure if there is only one spot formed on the TLC plate after the elution process. The results of the elution process of cinnamic acid from kemenyan resin in this study is given in Table 2. The results showed that the cinnamic acid was successfully isolated since it has a similar polarity to ethyl acetate. The results resemble the previous finding by Waluyo, et al. [12] where the retention factor for cinnamic acid during a TLC plate analysis lies in the range of 0.125 to 0.875 and the retention factors increased with a higher concentration of ethyl acetate as the eluent. The purity of cinnamic acid isolated from the kemenyan resin also has been determined in this study as shown in Table 1, and lies in the range of 90.9 to 94.3%. According to Waluyo, et al. [12],  purity of the cinnamic acid is not influenced by the quality of the resin, but rather it is influenced by the isolation method used to extract cinnamic acid from the kemenyan resin.

3.2. Pre-treatment of Kemenyan Barks to Increase the Extraction Yield of Saponin

Pre-treatment effects of incubating kemenyan barks with Phanerochaete chrysosporium on the lignocellulose composition are  presented in Table 3. The kemenyan bark contains 15.33 – 33.33% hemicellulose, 17.67 – 24% cellulose, 36.65 – 43% lignin, and 0.08 – 1.33% ash.  The lignin content decreased with increasing incubation periods, reaching a maximum reduction of approximately 15% after being incubated with P. chrysosporium for 21 d. According to Purwanti [18], P. chrysosporium was able to decrease 50% of lignin content in rice husk and up to 81% in corncob [19]. A lower value obtained in this study as compared to the reference is likely due to the difference in their chemical composition. The agricultural waste typically contains 15-20% lignin [20] whereas kemenyan barks used in this study had an initial lignin content of 43%. Hence, a longer incubation period may be  required to degrade most of the lignin as delignification processes typically have a low efficiency and require a longer duration [10]. 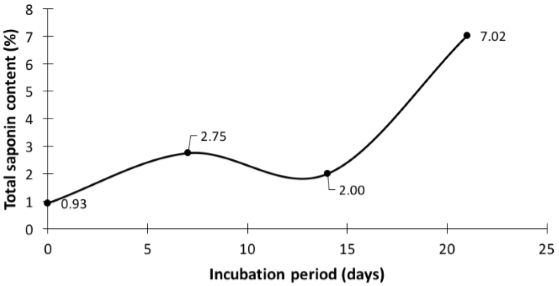 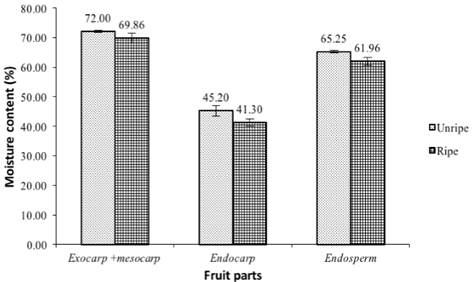 Although the exocarp and mesocarp of kemenyean fruits contain relatively low amounts of crude fat (0.50 to 0.91%), they still contain an appreciable amount of crude protein (3.55 to 4.27%) that can be further valorized to increase the economic value of kemenyan plantations. For instance, the exocarp and mesocarp of kemenyan fruits may be utilized as a substrate for the cultivation of Hermetia illucens to produce protein-rich biomass [23].

The physical parameters and cinnamic acid content of different resin grades have been examined. Grade IV, V and VI resin contain 21.78 to 24.89% cinnamic acid and the isolated cinnamic acid had a purity of more than 90.9 to 94.3%.  The effect of delignification of kemenyan barks with Phanerocahete chrysosporium on the amount of extracted saponin  from the barks and different fruit ripeness on the composition of the fruits also has been investigated. Pre-treated kemenyan barks are able to degrade 15% of the lignin after 21 d of incubation with  Phanerochaete chrysosporium and increase the amount of extracted saponin up to 7.5-fold higher compared the non-pre-treated barks. The ripe kemenyan fruits had a higher protein and crude fat content as compared to the unripe fruits.